Gulf Shores, Ala. – Gulf Shores Power Sports, LLC, a national marine sales and service company, is nearing completion of their new corporate hangar facility at Jack Edwards National Airport. The new 9,100-square-foot hangar is located in the Southwest Corporate Hangar Complex and is the third facility completed in the last 24 months.

Completed earlier were a new 11 unit cabin class hangar facility and new 16,800 square foot storage facility by Fixed Base Operator Gulf Air Center.  Both leased out within weeks of completion, the latter to new MRO Resicum International/Aeropro who themselves are planning a new 22,000 + square foot facility in the Business and Aviation Park. 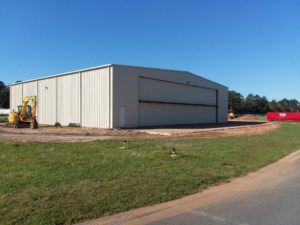 Vic Roberts, Authority Chairman remarked that it was satisfying to see the aggressive growth taking place in the complex.  The project providing the needed infrastructure to build the Southwest Complex was completed some five years ago just prior to the economic downturn.

The Airport Authority is also considering a number of build to suit projects for commercial operations in the Business and Aviation Park at this time.