Today, the Airport Authority of Gulf Shores held a groundbreaking ceremony for the new air traffic control tower facility at Jack Edwards National Airport (JKA). The new tower was made possible through $6.13 million in grant funding from both the Federal Aviation Administration (FAA) a 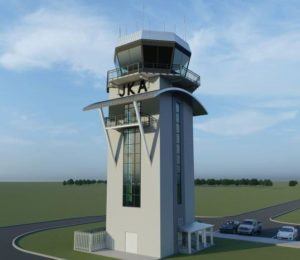 nd the “CARES ACT” secured by the joint efforts of Senator Richard Shelby and Congressman Bradley Byrne. JKA currently ranks as the second busiest airport in operations (landings and takeoffs) in Alabama and will rank in the top 40 of 256 Federal Contract Towers nationwide once the tower is in operation.

Senator Shelby announced the grant as one of four for Alabama Airports earlier this week stating, “This funding is significant for the state and will increase economic development opportunities in these communities as well as improve safety at these airports.”

Congressman Byrne said, “Jack Edwards National Airport serves one of the fastest-growing regions of our state. The funds that the FAA has approved for this much-needed tower will enable the airport to take another step forward in servicing its customers and the Southwest Alabama economy. In years to come, the airport will play an increasingly vital role in the continued development of Baldwin County. I appreciate the FAA approving these funds, and I look forward to continuing to support the airport’s growth.”

“Jack Edwards National Airport serves the thriving business and tourism market in Gulf Shores, South Baldwin County and the communities along the Alabama Gulf Coast,” said Mayor Robert Craft. “This full-service airport is an outstanding asset creating jobs and diversification opportunities for new and existing businesses. JKA is vital to the development and continued economic growth of the area and provides a transportation hub for anyone traveling for business, recreation or relaxation.”

The event included tours of an Elite Airways CRJ 700 and an announcement made by John Pearsall, CEO of Elite Airways, of the intent to begin providing the residents of Gulf Shores with scheduled service in early 2021 pending FAA and TSA approval.