Gulf Shores, Ala. – The Gulf Shores Airport Authority announced that Jetwinds, LLC, is nearing completion on their new corporate hangar facility at Jack Edwards National Airport. The new 10,000-square-foot hangar is located in the Southwest Corporate Hangar Complex and is the fourth facility added in the last 24 months. 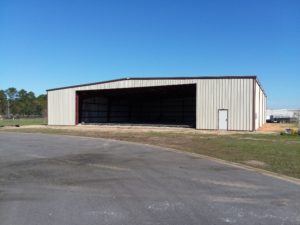 Jetwinds, LLC entered into a land lease for 0.5 acres with the Airport Authority for construction of their new hangar.  Jetwinds expects completion and move in to take place in March.

Vic Roberts, Authority Chairman remarked that it was satisfying to see the aggressive growth taking place in the complex.  The project providing the needed infrastructure to build the Southwest Complex was completed some five years ago just prior to the economic downturn.

The Airport Authority is also considering a number of build to suit projects for commercial operations in the Business and Aviation Park at this time.